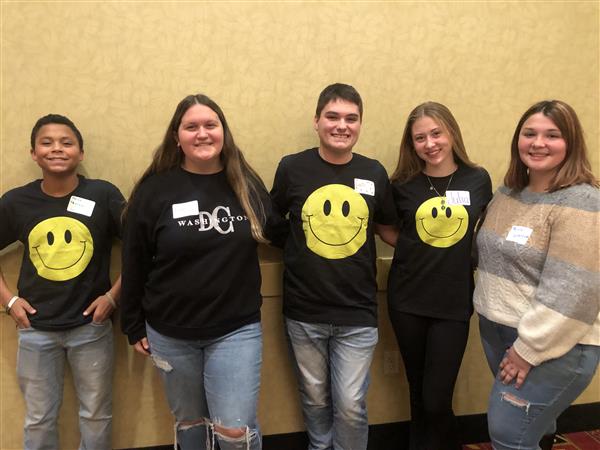 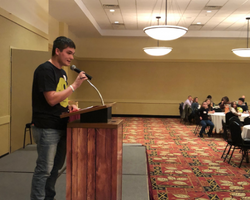 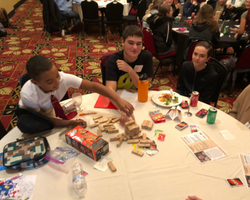 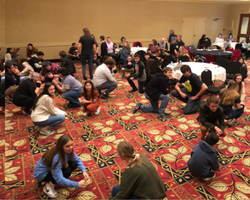 The entire conference was planned and executed from start to finish by students from Fort Ann, Fort Edward, Granville, Hartford, and Whitehall, with Julia Arquette, Louis Pratt, and Jacob Younger representing the school on the student planning committee. Whitehall students Aimee Fitzpatrick and Melanie Vandenberg also represented Whitehall by attending. Planning for the conference began in the spring with the selection of students who have demonstrated leadership, academic excellence, and are positive role models for their peers. The planning committee chose a theme for the conference and selected a keynote speaker.

This year’s theme was Students Mature In Leadership Experience (SMILE) featuring keynote speaker, motivator, and comedian Chris Bowers. Mr. Bowers speaks to audiences about the power they have to take risks, and to have confidence in themselves. He uses humor to build camaraderie with students so he can encourage them to overcome their fear of failure and fear of what others may think of them. He emphasizes positive ways of dealing with frustration and conflict resolution. He has presented in 42 states and over two million people throughout his career.

The table seating was purposely designed to bring students from other districts together, and break away from the comfort of friends and familiarity. The welcome and opening remarks were made by Fort Ann CSD student, Brody Stockman. The student activities included a Chris Bowers version of “Rock, Paper, Scissors” and “Getting to Know You Jenga,” with instruction from Felicity Columbetti Fort Edward Union Free School. The students also  learned the importance of flexibility, as the anticipated inclement weather caused a later start which required the schedule of events to be modified. Additionally, several school districts expected to attend had to cancel due to school closings. However, in the words earlier from the keynote speaker, Chris Bowers, the students smiled and adapted. The day concluded with Louis Pratt providing the closing remarks.

Thank you to our students for the hard work and proudly representing Whitehall.