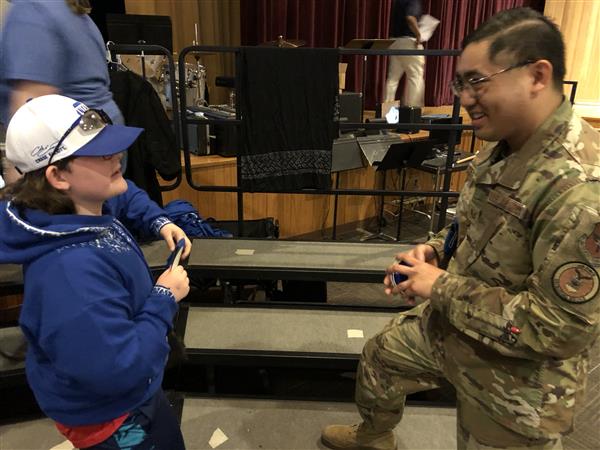 This school year students in the Whitehall Jr./Sr. High School recently organized a “No Place For Hate” chapter. One of the many goals of this student-led initiative is to help promote a positive culture.

Whitehall’s chapter recently hosted TSgt BJ Andrew De Guzman, a second generation Filipino, who grew up in San Diego and  has been serving in the US Air Force for the past ten years. This was not his first visit to the school, as he has been there previously in his recruitment role. He said when he saw the recently hung “No Place For Hate” banner in the school he was compelled to find out how he could help spread the positive message.

TSgt De Guzman addressed an audience of approximately 75 students ranging from grades 7-12, who chose to attend the optional assembly. He began with a historical overview about the challenges faced by Filipino people throughout history and the challenges they face today. He provided examples of the 1882 Chinese Exclusion Act and World War II internment camps. Examples of modern challenges included the model minority framework, positive stereotypes, and violence against Asian-Americans.

Both of TSgt De Guzman’s parents emigrated from the Philippines. In another effort to assimilate as American citizens, both his father and his uncles joined the U.S. military to pay their dues and prove they were “real” Americans. For younger Asian-Americans, such as TSGT De Guzman, the generational gap can be a challenge within families. In another effort to assimilate as American citizens, his parents thought it was important for TSgt De Guzman and his brother and sister to adopt US customs and culture. By the time he was four years old, instead of speaking the Philippines national language of Tagalog, they only spoke English in their household. However, they still wanted their children to honor the customs and norms. This is just one of the many challenges children of immigrants face within their own families particularly.

Another challenge TSgt De Guzman faced was loneliness when he was stationed in the Philippines for two years. “Though my heritage is Filipino, no one wanted to interact with me because I don’t speak the language. Also, the Filipino culture is sociocentric and American culture is egocentric. It’s  a matter of place of origin conflicting with place of birth,” he explained.

TSgt De Guzman encouraged students to take interest in learning about other cultures whenever possible. He appreciates the various cultures he has been able to experience and explore through his world travels as a refueler with the U.S. Air Force. He makes it a point  to collect some article of symbolic clothing from everywhere he travels, and displayed a yukata he obtained from Japan and a barong from the Philippines.

TSgt De Guzman shared that he personally has not faced discrimination or racism in the military, but knows of people not as fortunate. He challenged the students to stand up instead of standing by when someone is not being treated right. He also encouraged students to look at life through the lens of others to combat hate.

To date, approximately 30 students grades 7-9 have been regularly meeting during their lunch and advisory periods under the advisement of school counselor Mr. David Gale and high school teacher Mrs. Andrea Mistretta. The students have been collaborating and planning for student-led activities as required by the ADL in order to be a recognized chapter.

The school’s No Place For Hate advisor and school counselor Mr. David Gale said, “It was fantastic to see so many students attend this optional assembly. Based on the questions they asked, it was evident they were listening to our guest speaker’s message.”